Menu
Your Cart
5% OFF on all special products Shop now

A brief history of costume Jewelry

Costume Jewelry started in the 1930s as cheap disposable jewelry meant to be worn together with a specific outfit, but not intended to be handed down through generations. It was meant to be fashionable for a short period, outdate itself, and then be repurchased to fit with a new outfit, or with a brand new fashion style. It became available in large quantities in the 30s.

Cheap jewelry also existed long before the 1930s. Paste or glass jewelry existed as far back as the 1700s. The rich had their fine jewelry duplicated for different reasons, and this was done using cheap paste or glass stones.

With the growth of the middle class in the mid 1800s, there were now different levels of jewelry being manufactured using different materials like fine, semi-precious and base materials. Fine jewelry of gold, diamonds, fine gems such as emeralds and sapphires continued to be made.

Jewelry made from rolled gold; which is a thin layer of gold attached to a base metal, entered the market and affordable to the middle class. Those set of jewelry were often set with semi-precious gems such as amethyst, coral or pearls.

And then there was jewelry that almost anyone could afford. They consist of glass stones and base metals made to look similar to gold. All the three types were intended to be passed down to younger generations.


There are usually clues that can help one to find out what era a piece of jewelry is from. He or she can also identify the style, material, the type of piece that a jewelry was made of. For example dress clips came into the market in the 1930s and were no longer fashionable by the 1950s.

Jewelry reflects styles, designs, colors and stones of the particular era. For example, from 1910 until 1930, silver was the favourite colour for metal, so jewelry was found in platinum, white gold, silver or a base metal coloured to immitate silver.

By World War II, gold was already popular again but it was in short supply, since it was very important to the war effort. Whatever gold that was available was made into very thin sheets and usually bonded to silver (it was called vermeil) before being converted to jewelry. By the 1930s, rhinestones popularity was ever increasing in most parts of Europe.

It was unavailable to the Americans until 1940s. As a result, many of the pieces from this period tend to feature a lot of metal and a single stone or a small cluster of tiny rhinestones.

These days are certainly not much different from past times. We still have fine jewelry, semi precious jewelry, and of course costume jewelry very much available to us. Costume jewelry can add the finishing touch, show your fashion sense and make events more meaninful.

Costume Jewelry styles of past years are now becoming very fashionable again, and many are being reproduced. Even with costume jewelry there are many difference in quality. Many of the new pieces do not have the vibrance in the stones or the weight of the older pieces. The new costumes are made from alloys of copper-zinc, gold, silver. The last very gold depending on price and usage.

Antique and vintage costume jewelry are both fun to collect (as in collectors’ items) and fun to wear. No longer is costume jewelry simply "collectable." It is "in style, and " "fashionable," and a terrific conversation starter. Dress to impress! . For Dotted Jewelry, we endeavour to put a gem in your life. 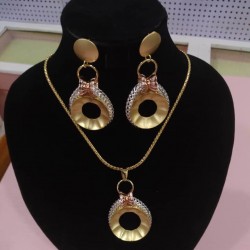 Jewelry Set Necklace 002D
This beautiful set of necklace and earrings are especially good for women on traditional attire with both skirt and wrapper. This gives an elegant loo..
₦6,100
Add to Cart
Add to Wish List Compare this Product
Buy Now Ask Question
Quickview 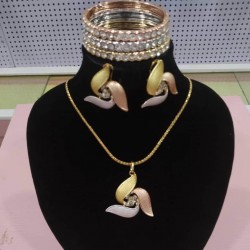 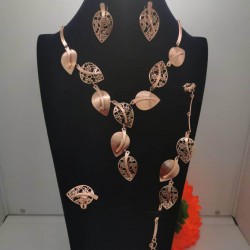 Costume_VN022
Leaflike elegant look costume jewelry fit for great occasions and can match nearly any tradition attire. It is made from alloy material and can last f..
₦15,000
Add to Cart
Add to Wish List Compare this Product
Buy Now Ask Question